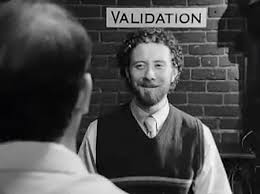 In the Spring, I happened to have my annual gynecologist appointment. As he worked, Dr. B asked me what I had been up to in the last 2 years. (I always put this appointment off, usually with the intention that I will make the appointment after I lose weight, which never seems to happen, so the appointment is less annual, more biennial.)

I relayed what I'd been doing to keep busy, and I mentioned that Danny had been diagnosed with autism.

I murmured my thanks as I lay there, legs splayed, and I considered what he said. I didn't know exactly how his reaction made me feel. Somehow, it didn't feel like the right response to my news, but I had no idea what would have been a better one. I knew Dr. B meant well and was being kind. Still, I thought there had to be a better way to answer such a revelation.

Over the last year and a half, there have been many responses to the news of Danny's autism, but mostly, they fall into three categories: expressions of sympathy, objections to the diagnosis ("Danny's fine! There's nothing wrong with him! My kid does the same thing!"), or offers of advice.

Of the three, I would prefer the offers of sympathy, hands down. Frankly, the reassurances that Danny is fine and the advice people offer just leave me feeling very defensive, alone and misunderstood, no matter how well-meaning.

Fast forward to my family reunion this past weekend.

On the drive to Chicago, I wondered if anyone would broach the subject of Danny's diagnosis. The last time I saw many of these family members was 2 years ago at the last reunion. Danny had not been diagnosed, but I think it was obvious to most of my family that he was having major difficulties.

My family, as a whole, typically avoids discussing uncomfortable topics like these. I don't think many know what to say, so they avoid the subject altogether, at least with the person directly involved. I understand this and have been known to do it myself. After all, it can feel awkward even trying to raise the topic, especially when you haven't seen the person in years. What do you say?

Still, it sometimes leaves me feeling a bit isolated.

When we arrived at the reunion, Danny and Charlotte joined their cousins on the playground, leaving me to relax on the sidelines. As I watched to make sure Danny wasn't getting over stimulated, my cousin Ann approached me.

Only a year apart in age, Ann and I were very close growing up. Over the years, though, we haven't seen a lot of each other. She lives in a different state, and we both got married and had kids, all of which made keeping in touch difficult.

I was glad to see her and prepared for the small talk I was sure was coming. Instead, we somehow got on the subject of autism. And this is when I had probably the most validating autism discussion with someone not directly affected by the disorder. Ann asked me the most thoughtful questions about what Danny was like, how autism affects him and what that means for his social and school life. She inquired about challenges I face with parenting and disciplining. And she listened as I explained that though Danny appears to not care about others, he is actually quite empathetic.

Thankfully, Ann never offered me a piece of advice. She didn't express pity and she never tried to downplay my challenges in an attempt to make me feel better. Instead she offered me the best gift of all: validation.

She asked me if I ever wondered, "Why me?" If I ever just got angry that I had to deal with this, angry that my kid was saddled with such difficulties.

I choked on the word "Yes!" as I tried to keep from crying. Ann had tapped into the very issue I had been struggling with for months. After Danny's diagnosis, I wasn't surprised by my anger; it seemed appropriate. Eventually it subsided, replaced by a feeling of determination to get Dan all the services he needed.

Recently, though, the anger has resurfaced, surprising me by both its intensity and my inability to move past it.  Why now am I feeling so angry and hopeless? Shouldn't I be past that at this stage? What's wrong with me that I'm so sad and angry? I have been feeling guilty and weak and wondering if the anger will ever go away.

But when Ann asked me that question, somehow I felt peace. She validated me, confirming that, yes, dealing with autism is difficult. Sure, everyone has problems, some much more heartbreaking than mine. But, that fact in no way diminishes my pain. It was almost like she had given me permission to continue grieving, as long as it takes.

And apparently, that is exactly what I needed.

Patty is a stay-at-home mom to three wonderful kids, all of whom have Sensory Processing Disorder.  Her oldest son is also on the autism spectrum.  She is a freelance reporter for her local newspaper and started a LEGO Social Club for kids on the spectrum last year.  She blogs at www.pancakesgoneawry.blogspot.com
Posted by Patty O. at 8:00 AM