When we first brought Cary Lynn home to live with us she was little, observant, and non verbal.

At nine months old when babbling and words are starting to kick in my daughter remained silent. 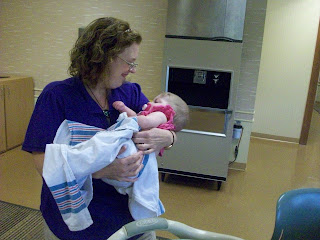 That was our first meeting.  Mind you with a mouth full of binky it's hard to say anything.  And in the beginning that binky was a staple for every one's sanity!

But that didn't mean she didn't communicate.  My daughter knows how to get her point across.  The first week when we landed in the hospital the doctor came in and made the rounds.  He stood by my daughter's bed and compared her intelligence level to that of a slug.  Or something uncomplimentary.  Anyway, he then stuck his finger too close to her mouth to poke at her.  She bit him.  Hard.  Yup I thought, she's a keeper.  It was at that point that I really fell in love with my new daughter.

We dutifully did what all good parents did and signed up for speech with Early Intervention.  Her teacher came weekly and her goal was speech.  But still the words didn't come.  You see Cerebral Palsy robbed my daughter of so many things.  Looking at an MRI we saw that her language center is roached (not a medical term but you get the point).  Asking her to learn to speak is as pointless as asking me to learn Sanskrit.

But lack of speech does not mean lack of communication.  Those are two different things.  Even though the words didn't come the sounds did.  Clicks, raspberries, facical expression and various vocal tones erupted.  Even though words weren't there sounds were.  Soon it dawned on me that she had a lot to say.  So I started to listen.  Soon I found myself understanding Cary Lynn's primitive language.  I also got to be her interpreter.

But I wanted more for her.  I wanted HER to say words.  So by then we were outpatients at Children's Hospital.  They introduced me to the big mac switch. 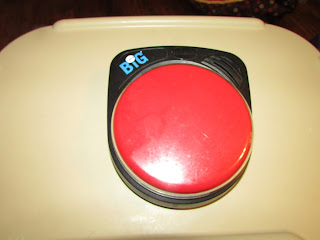 Yay!  I felt like we were getting somewhere!!!  But the thrill didn't last.  You can record ONE phrase. That's it.  So Cary Lynn got bored.  I tried to convince her speech people that she could say more.  But they were stuck on "we only do it this way and kids like Cary Lynn just can't handle more than one phrase."  My daughter was being denied a voice.  I tried to make it work.  We had a huge meeting with the heads up.  They were only concerned with the attendance policy.  Not giving my child words.  In fact they really believed that kids weren't capable.  So I did something really sensible.  I left.  I figured no therapy was better than what she was getting.  We did finally find a good fit at a new center.

I was discouraged.  I started to question whether Cary Lynn really was capable.  Then the stars lined up.  First I met another mom who was passionate about communication.  She made Cary Lynn a very special book. 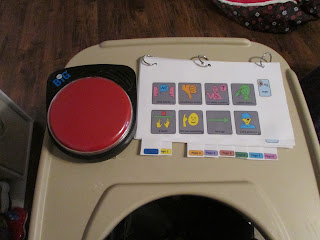 This is PODD.  This book with the switch opened a whole new world.  With a person scanning the words Cary Lynn had lots of options.  But I was greedy.  I wanted more for her.  I wanted her to have ALL the words.

So I traveled to another children's hospital and had her evaluated.  After two hours they brought us back.  After another two hours we were told we get to trial an Accent 1400.  Cary Lynn rocked it in the eval but after I went home I started to get a little (OK a lot) anxiety ridden about it.  What if it didn't work?  What if it was too much?  What if she couldn't?  What if I didn't model it just right or just enough?

Once again stuff fell into place.  We met with Kate Ahern.  If you don't know who this fantastic human is check her out here.  She met and spent quite a bit of time working with my daughter.  Because she believed in us and that we can make this happen I believed that I can do this and we can give my child a voice.

Then the device came.  Our sales person conveniently went on vacation but luckily my friend came up and we got that bad boy in gear! 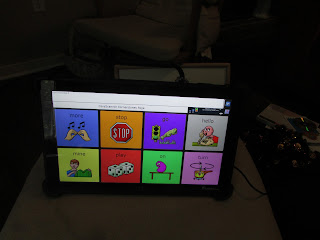 This is core scanner.  It doesn't look like much yet, but as time goes on more and more words will be added.  This is the start.  I was overwhelmed a bit (ok a lot but I managed to squelch it) and I hesitantly introduced Cary Lynn to Chip (yes I name everything).

Here's Chip your new personal communication assistant, said with a smile. The Cary Lynn proceeded to push Chip off her tray in an effort to kill him off quick.  And laughed.  Because you know destroying a $7000 device is all in a day's work.

NO NO NO YOU DON'T THROW CHIP!!!!  So Chip needed a second and so did I at that point.  I took a breath, turned him on and started playing with Marvin.  As I demonstrated Chip to Marvin I heard interested grunting coming from some little person.  I asked her if she wanted to try again.  A click meant yes.  So I handed over Chip.  Carefully.

Chip and Cary Lynn have started bonding.  She still likes to try to send him to his untimely demise but she is starting to understand that her words have power. 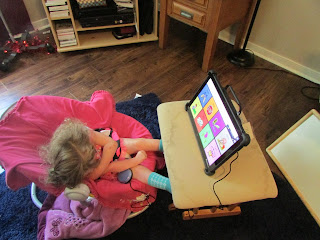 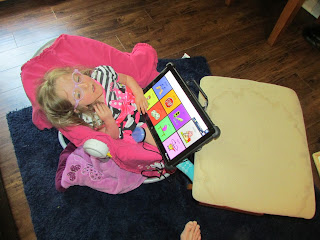 She has a switch, Chip reads the words and she picks.  Right now she prefers to wack Chip in the face with her hands. 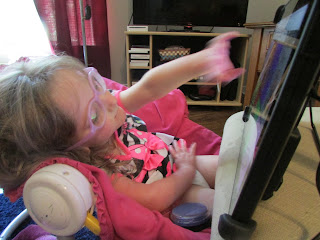 But I'm not picky.  I'll take what I can get.  She even asked to use Chip today!!!  So we are making progress. It takes time but I'm willing to invest the time.  I'm only hoping that the world sees what I can see.  A little girl who is smart, sassy and finding her voice. 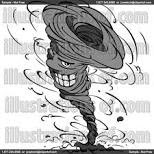 I am a fast-moving kind of a gal.

Always traveling at a steady pace.

Occasionally, however, the Universe will place something in my path to block my forward motion.

I am frozen for a moment, unable to move, touched deeply by something profound,

something that moves me,

something outside of myself.

These moments are often caused by the strangest and simplest of things,

the lyrics to a song

or a license plate posted on the car in front of me.

Whatever the message or incident, it has a profound effect on me.

It awakens me from my blindness.

When you think about it, if I am always looking ahead,

then I am oblivious to what's behind me.

I miss the opportunity to value my important progress.

I lack the ability to reflect,

to think about where I have been.

To admire the progress I have made.

so that I may appreciate where I am headed.

Important life lessons reside in these rare and powerful moments.

They are glimpses, I believe, of something we need to acknowledge.

A message we need to hear.

To me, it's like a PowerPoint presentation sent directly from above.

an emphasis on something overlooked.

It is a glimpse that took my breath away.

On Friday, my beautiful niece sent me this.....

It is Nick singing

reminding me on this day,

to just sing, sing a song.

Help: My doctor said my child had a rare condition! Where do I find information?


It’s hard enough on family caregivers when their child receives a new diagnosis.  The challenge is made even more difficult when the condition is rare. 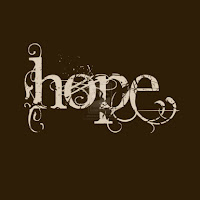 What are rare disorders?

Rare disorders affect only a small number of individuals.  It may be daunting for family caregivers to try to find information that’s scarce.  There are many websites for health conditions, but not a lot that cover rare conditions.

Where is reputable information available?


Ø  If parents find out that their child has an unusual condition, there is good information available from the National Institutes of Health.


Ø  The National Organization for Rare Disorders has a searchable database.


Ø  For chromosomal disorders, there are descriptions of genetic testing and conditions available from Unique. 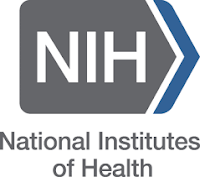 A Note on Genetics


There are many good resources available and parents may feel relieved if the child’s symptoms finally “have a name.”  If it does turn out to be a genetic condition, other resources (besides Unique listed above) can be helpful:
·         Explaining the basics of what genetics means for families is Genes in Life.
·         The Genetic Alliance has various resources, including “Children and Youth with Special Healthcare Needs in Healthy People 2020: A Consumer Perspective.”
·         There is even information regarding children with developmental or other disabilities who need organ transplants available from the Boggs Center.

A Final Word on Support
Sometimes family caregivers need to talk to another parent “who has been there.”  Many of the disability specific organizations may have support groups or match parents.  An excellent resource that matches trained volunteer parents to families of children with the same or similar condition is Parent-to-Parent.

Family caregivers won’t feel so helpless or hopeless if they find out information on their child’s condition and learn how to handle it.  If parents know what to expect, they can take better care of their child, resulting in better health outcomes for their child.
Resources:
Conditions
National Institutes of Health-Rare Diseases
http://rarediseases.info.nih.gov
National Organization for Rare Disorders
www.rarediseases.org
Boggs Center-transplants and disability
http://rwjms.rutgers.edu/boggscenter/products/documents/TransplantPampletFINAL6-11.pdf

Lauren Agoratus is a parent/advocate who works for the Statewide Parent Advocacy Network and serves as the NJ Coordinator for Family Voices (www.spanadvocacy.org), a national network that works to “keep families at the center of children’s healthcare” at www.familyvoices.org or FB www.facebook.com/pages/Family-Voices-Inc-National/137783182902269.  She also serves as NJ representative supporting caregivers across the lifespan for the Caregiver Action Network (formerly National Family Caregivers Association) in a volunteer capacity at http://caregiveraction.org/ or FB www.facebook.com/CaregiverActionNetwork.