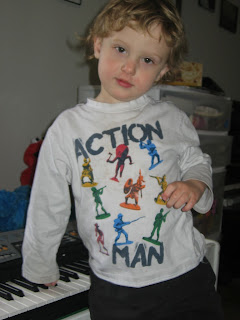 My son got a dark blue shirt for his 4th birthday that declares in yellow letters: “AUTISM IS MY SUPER POWER!”

I hate this shirt.

But I’m struggling to articulate why.

It’s not because I hate my son.

I love him madly, endlessly, and for who he is.

It’s not because I hide his severe autism—quite the contrary in fact. I write articles about his progress, bore people with “Liam updates” at parties, and talk about autism all the time in everyday life.

“Get that nasty thing out of your mouth,” she hissed at him as she bagged our groceries.

I looked over. Liam was spaced out and mouthing the germ-infested plastic buckle on the shopping cart. His nose ran and he added his snot to his spit on the radioactive seat fastener.

“Out of your mouth,” I commanded, ignoring everyone else in the store—the cashier, waiting for me to enter my pin number, the old woman behind me, the grocery bagger. My whole world shrunk to this battle of wills me between my son and I.

He looked at me (great eye contact!), blinked lazily like a bored amphibian, and then spit out the buckle with no melt down (thank you ABA training!).

He flopped me a high five.

I traded him a Cinnamon Chex piece and became aware of my surroundings again.

“He has autism,” I muttered to the clerk, who had watched our whole exchange slightly agog. “You should see some of the things he’s mouthed in the last year.”

She commiserated with me that her kids still did the same thing, and we left it at that.

This was a pretty ordinary event, but I wonder how this would have gone if Liam had been wearing a shirt that bravely, boldly advertised his disability.

Would this shirt immediately have earned me—his long-suffering mother—a proper pity party? Would it have helped raise awareness just a bit more (“oh look, she’s grocery shopping with her autistic son, just like a normal person”)? Would it have shown my acceptance of my beloved preschooler?

But I am not ready to advertise Liam’s disability, special needs status, or whatever you want to call it just yet.

Maybe this is because I still want to give him the chance of normalcy. A fleeting moment where whoever he approaches will think—before he starts stimming, or spinning, or making odd noises— that he’s just another curly-haired, green-eyed smiling kid.

Maybe this need to have other people see him as “just like other kids” has to do with my own issues. Maybe it’s about the fact that I’m still coming to terms with autism as a life-long thing, but I’m working on it. I mean you can’t really tell that Liam’s autistic just by looking at him—and this shirt would take out all the guesswork and immediately mark him as different—like the physical traits that characterize a child with Down Syndrome or Cerebral Palsy.

But is that such a bad thing since he is different? He’s non-verbal, has almost no attention span, has very little receptive language, and still has cripplingly erratic problem behavior?

Maybe I should be ok with letting the world know he is autistic by advertising it on this shirt.

As I think about this hated shirt more, it reminds me of other kids’ t-shirts.

I’ve seen t-shirts that playfully advertise and own up to all sorts of bad behavior—“ROCK AND ROLL ATTITUDE” or “GRANDMA’S SPOILED BRAT”—but these are somehow categorically different than this autism t-shirt. These whisper to the reader with a hearty co-conspirator wink: “Ain’t I just precious! Just a naughty little so-and-so!”

Maybe in a way, it’s a great big F*ck You! to all these other “too-cute” shirts. Maybe it’s saying: “So what!, This is me, I own my disability, but I’m not totally defined by it.”

I am all about acceptance, awareness, and empowerment, but my gut tells me not to send my kid to school in this shirt.

The person who bought it for him told me that she bought it because in the most literal sense of things: “we really don’t know what’s going on in his head and he could be a genius! “

I know, I know. He could be. But I can’t know because he can’t express much of anything right now beyond basic needs.

So, maybe I’ll hold off a while. Wait “until he recovers and then he can wear it” as one autism-mom friend of mine advised me.

Or maybe I just wait until he is aware enough to pick out his own clothes, to know that his birthday was yesterday, to play with his brother without prompting.

If (or when) we get to that point, he can wear whatever he damn well pleases and I’ll be the happiest, most non-conflicted mom around. I promise.

- - - - - - - - - - - - - - -
Jamie is a writer, professor and mom to two busy boys. She writes a column for the Autism and Asperger Digest and her work has appeared in various other magazines. Visit her at www.jamiepacton.com to learn more or email her at jamie_pacton@hotmail.com.
Posted by Jamie at 7:14 AM