The Mayor of the 9th Floor

He sat bravely on his hospital bed, his tiny head covered in neat rows of shiny, metal electrodes, giant tears streaming from his eyes.

"Mummy, I don't want to put the buttons on," Nicholas screamed, kicking his feet and flailing his arms. I held him tightly and watched once again, as the hospital staff prepared my six-year-old son for an EEG.

"I know Nicholas," I said, feeling a large, dry lump of helplessness and fear climb slowly up my throat. I tried to swallow the rising lump, but my throat was too tight. I watched as my son's head became lost beneath hundreds of thin, colored wires. I put my head down and swallowed again trying so hard to get down that painful stone of emotion.

I thought about the many procedures and operations my small son had endured in his first few years of life. Why is it he who always must suffer, I thought? Why was he born with Prader Willi Syndrome? Why does he have a seizure disorder? Why does this innocent child have to endure so much pain? Why is our life so very hard? I asked many questions inside my head, knowing no one would answer them.

"We're all done," the nurse said, and I loudly blew out the breath I'd been holding for hours. I thanked God that this torturous procedure was finally complete.

"Yes!" said the technician, and she too finally breathed, more thankful than I that her difficult job was over.

"Oh, thank you!" Nicholas said enthusiastically, turning his wire-covered head to look at her. 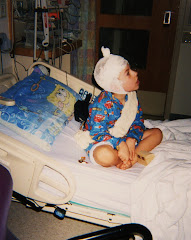 "You're welcome," she said, stunned that this once screaming child was now quickly composed and thanking her kindly for putting him through such a terrible ordeal.  She finished her work by taping a gauze-like sock gently over his head.  It looked like a medical stocking hat that covered the mass of colored leads and wires. I closed my eyes tightly and prayed once again that this ghastly image of my son's tightly wrapped head would not make me cry.

The nurse attached his stocking hat of wires to a small battery pack that was tucked neatly inside a small, black backpack.  Nicholas looked at the pack and smiled brightly. He clapped his hands with glee and exclaimed,

He quickly put his arms through the straps of the small backpack and smiled warmly at the speechless woman, melting her heart with his joyful exclamations and enthusiastic participation. With this quick change of mood, this emotional transformation, my unique son explained with no words, that he understood the meaning of the word, resilience.

I wiped the tears from my face.

Throughout our hospital stay, I watched my son in awe, as he warmly touched the lives of so many fellow human beings. The entire Neurology wing seemed pleased to meet this happy, little soldier wearing his headdress. They nicknamed him "The Mayor" as he comfortably chit chatted with all the folks of the 9th floor.  Nicholas warmly greeted patients, janitors, doctors, technicians, nurses and cafeteria staff. All were welcome to his new home. All were treated with the same compassion and appreciation.

"Thank you so much," he said to the cafeteria staff as they delivered his meals every day.

"How are you today?" he asked the nurse taking his blood pressure. "Do you like my Diego backpack?"

Even the stern woman who monitored Nicholas's sleep, came into his room smiling one day. She guided me into the lab where video monitors record the movements all patients make while they sleep. There, on one of the television screens, was the smiling face of my precious son. His head was resting gently on the very colorful picture of SpongeBob SquarePants that adorned his beloved pillow. It was difficult to discern who was happier, the silly, yellow sponge or the beautiful child wearing a turban made of gauze.

I am amazed at this young boy's desire to reach out to others despite the overwhelming difficulties in his life.

I realize once again that it is my life that is difficult, not his.

I am like all parents of children with special needs. My life is a mixture of incredible pain and thoughtful introspection. I must watch my beautiful son suffer more than most. But also, I am blessed, as I watch him spread good will and love so freely to so many others in this world.

As we packed our bags to leave Children's Hospital, many of the staff came in to our room to shake Nicholas's hand good-bye.

"Good-bye," he said to them all, "Drive carefully!"

Come visit our blog at www.onalifelessperfect.blogspot.com.

Also, on November 3 at 10 pm (eastern time) on Discovery Health, there will be a episode called, "My Deadly Appetite". It features a 14-year-old boy named William Weaver who is admitted into the Children's Institute in Pennsylvania for symptoms related to Prader Willi Syndrome.

Posted by Hopeful Parents at 6:38 AM