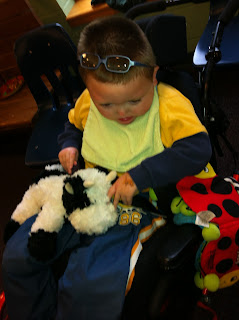 "Why is Dermot here?", he asked, and for a nano second, I was offended. But then I remembered, he's eight.
"Why wouldn't he be here, he's Owen's brother." I answered.
"But he can't play basketball" he continued.
"I know, but do you know what Dermot's favorite thing to do is?"
He shook his head.
"He loves being around lots of kids and listening to them play."
That satisfied him for a while and off he went to play basketball with all the other eight year olds attending Owen's birthday party.

Not being a great basketball player, he returned while I was preparing the tables for the influx of Pizza Hut that was on it's way.

After answering many questions about Dermot I stopped what I was doing, rolled Dermot closer to the curious one and sat down on the bench next to him.

I decided this wasn't one of those moments I dreaded, being peppered with uncomfortable questions about Dermot.

I went around to the back of Dermot's wheelchair and began to set up Dermot's feeding pump.

"Do you want to see how Dermot eats?"
"Yeah."
"He has a button connected in his tummy and I hook this tube up to it, then the food goes right into his tummy."
Why can't he eat regular?"
"When he was little he used to eat from his mouth, but then he started choking on his food a lot and that made him really sick. He used to have to go to the hospital a lot"
"Oh, (long pause, I could almost see the wheels turning in his head) that's not good."
"Nope, it isn't."

As the party continued, this boy stayed close to Dermot and I. He asked questions as they popped up and I tried to answer them the way I'd answered them with other curious children. While the other boys were coming out of the gym to sit down for pizza I heard another question, but before I could answer it, another friend of Owen's already had. Then another boy told him something about Dermot.

The Q & A sessions I have about Dermot are difficult for me sometimes, but as I watched the other two boys answering for me, I realized. These moments are important. Every question needs to be answered, every "why?" every "how come?" needs to be answered. Because I might not be there the next time someone asks, but hopefully the other little boys will be and they can handle the new guy...

- - - - - - - - - - - - - - -
Sue Sullivan, a mother of three beautiful boys. Two are typically developing and one has a rare mitochondrial disease. He is why she writes. She is on a 20+ year quest to be happy, joyous and free. She blogs at sullivanedinaboys.blogspot.com
Posted by Suzanne Sullivan at 10:35 PM