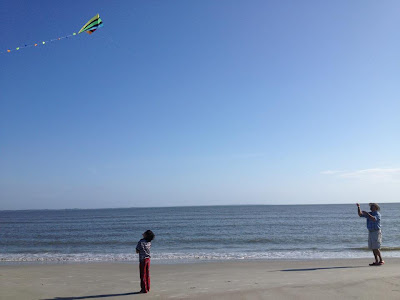 Yet DH and I vacation and travel rather a lot !

Managing  our own  expectations

One of the true pleasures in parenting is seeing our child experience joy.

However, we can forget that our kids have  a unique way of looking at things – what we imagine to be enjoyable to them, may not be.

I asked R the other day, if he remembers where he was in Christmas last year

“Doubletree hotel !” he answered, a smile lighting up his face at the memory

I and DH smiled at this today

But on that day, I remembered that feeling of disappointment when we had   waited and waited  to get in front of the crowds to watch  the once-upon-a-time parade and our child did not  gasp with wonder!

As I looked down at his face, he reminded  us, that after this he is “all done magic kingdom”

Plan some activities that your child will enjoy

Find some tools that will help you be patient

You could even have your own mantra

“Repeat to yourself...He's doing the best he can…. Or say to yourself ..Sniping hurts his self esteem….Something that brings X’s   basic needs to the forefront of your mind so that you don't get panty-twisted by his actions.” Says Kellie


The thing is, at least with Z, you cannot have any expectations. We struggle when we travel because DH and and L (and me, too) want to do everything we possibly can in the time we have wherever we are. But that's when I lose Z.”Says Debbie

We make sure we bring along R’s numbers wherever we go.

We also try to make sure he has his electronics

“On the one hand, it's their vacation, OTOH, for some kids like A, electronics are the surest way to shut down observation, mental engagement etc.

Here is my own bias : in years past I've been more liberal, and as a result, A shut himself off to everything because he was obsessing over the electronics, and the entire day became about having access. I don't think he can have a measure of "healthy use"- it's an all or nothing thing for us.
When we went skiing in the winter, I deliberately didn't take any level 1 obsessive handhelds - and that ended up being a good thing- since he didn't have his DS, he had no choice but to play with his sister, talk with his cousin etc. More importantly, after the initial disappointment, I really didn't get the feeling at all that the lack of DS was in any way detrimental to his self regulation or even good time (I had it in my purse in case of an emergency but never brought it out- to this day he doesn't know I had it all along).

This summer will be challenging for him because we will travel a lot- but I'm planning to do the same. He can take his i-Pad but nothing else. I will encourage him to listen to music instead.” Says Lillian

“Y is like a 2 yo with the motor skills of a nine year so he can do a lot of mischief if left unsupervised. For example, he make take someone's medication or use someone else's toothbrush etc. At least in my home, I have it under control and I have some form of respite with school or ABA. When I visit family I have to  be on him 24 7 for the whole visit” says Purvi

"We've kept our visits home short. I hate not to visit, but after a few days, we need to go. We usually stay with my parents, and their place is tiny, so there's not much to do if we can't get outside. I think we will try staying at a hotel next visit."  Says Ellen

“ … no one understand that my kids are obsessed with electronics and insist on leaving them out everywhere… then they get mad at me when my kids are touching their phones, ipads, etc. No one understands how vigilant you have to be. Heck, we had a code Adam at the museum and that was when we had 4 adults with 3 children. They mock me as a copter mom and think I'm ridiculous. And yes, Z has gotten into someone's purse and taken their medication” says Meg

Make sure to not to ignore your own needs and the needs of the rest of your family .

You deserve to enjoy yourself too

“We have to say that I have a pretty selfish POV when it comes to vacations. We work hard all year , we have very little time off, so vacations are usually planned around what we want to do, not necessarily what is best for X. Because if it were up to him, he would never leave the living room except to go to school. Usually he hangs in there, often times reluctantly, when it comes to seeing new places (though we have been guilty of springing new stuff on him just because an opportunity came up- well....he'll have to deal with that once in a while too).
I keep telling myself that the autism will still be there next week, but the (vacation place) won't.”
Says Lillian

Make it Easy for yourself

"We used to stay with friends and family, but as of about 2 years ago it started to become really frustrating. All of the kids in our cohort were aging out of the "roam around the house randomly destroying or getting into mischief" stage while A is still in it full swing. So we do not go visiting as a family nearly as much as we used to. When we do, a hotel is a MUST.

A hotel obviously has far fewer chatchkes, everything can be cleaned or fixed. It is so much more relaxing for DH and I b/c when A  is over at another house, one of us has to be shadowing him at all times. He is so curious and well.... you know."… Says Karen

it’s like there have to be certain anchors in place. Landmarks. Rest stops of familiarity and even perseveration-oriented. Like the breaths in between the contractions and pushing, a time to catch your breath before you have to move forward and endure once more.
Says Deb

“I think I should bring his little pop up tent beause then he can escape when he needs too and still be part of our group vacation.  Says Danielle

“We  must have a larger area. Although we are only a family of 4, we often try to rent a 3 bedroom unit so D can have his own space. “Says Amy

" Whenever we go somewhere, we allow L to scope out an area where he can retreat to have "alone time" to regroup. Sometimes it's his cousin's bedroom, away from the rest of the family. Other times, it's a bathtub in the hotel. Just somewhere he can go for solitude.” Adds Kellie

Eveyrthing is less stressful when you are not hungry or sleepy

“I think the key is having a kitchen or access to familiar foods. I don't believe in introducing new foods on vacation. Too stressful for everybody! “ Says Purvi

We never travel without planning a schedule

"Priming is key . We showed Y a map of the Bahamas. I also showed him on a map that we will stop in Atlanta first. He was upset about the layover, but did a lot better bc at least he expected it. I also showed him pictures of the resort and told him there was a big lazy river." Says Purvi

Christine adds “I highly recommend social stories for firsts, like riding on a plane. I made a social story, including pictures of the inside of an airplane. I wrote about every detail from riding the parking shuttle to picking up bags”

Some kids on the spectrum do fine  without structure

“Traveling is a delight now. It's free time away from therapy, pressure, peers who confuse him, feeling isolated, and being corrected 10 million times a day. “ Says Kat

But for most kids a well structured day is critical

“I asked him to make a schedule for the day. He got to plan it with a little negotiation and we pretty much stuck to it. We even wrote down what we will eat for our meals.”
Says Purvi

Then   the two people who are looking at him "oddly"  as he is making an eeeeee sound or cooing over a plastic number becomes a tiny annoyance , not something that actually hurts you

For me, when I feel that way, it is all based on fear. Mostly fear of me and my children being judged and fear of the future.
And for me, the only thing that has ever made a change in my interactions and in my real feelings is letting go of the fear. You let go of fear and you let go of the need to orchestrate, control, see the future, steer, guide, shepard, change, improve, etc. ,etc. ,etc

This post has been written for Hopeful Parents by  Floortime Lite Mama  whose blog about love, life and autism is here

In this post she has been helped by her Autism sisterhood.
Thank you Kellie, Purvi, Lilian , Christine, Kat , Kellie, Amy, Danielle, Ellen, Debbie, Karen, Meg.  And ofcourse my DH

Posted by Floortime Lite Mama at 6:00 AM