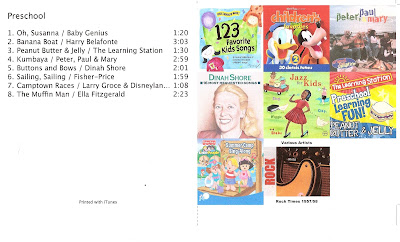 Wil has worked in a preschool this summer, the same one in which he's worked for the past two summers. By "summer" I mean he has actually worked 17 mornings, from 9:00 - 1:00. We'll take it, right? 68 summer hours otherwise occupied, a break, some structure, some learning of skills and the joy of knowing you can go do something for those few blissful hours, even if "bliss" means having a mammogram, or perhaps a dental cleaning, or if it's a big day, both.

For some of the kids, Friday was their last day, and Wil decided they needed an end-of-summer present from him. He made me a list of songs he wanted me to download from iTunes and then burn on a disk. He was unwilling to consider buying a CD for $9.99 with 150 kids songs already on there, no, he wanted to shop and search through iTunes for the best possible rendition of some of his favorites. Let it be known that his original playlist also included "Centerfold" by the J. Geils Band. "Care, we'll just find a version that is instrumental, then it will be appropriate."

This adherence to the plan, his story, what he tells anyone and everyone that asks him, was darling when he was younger. Now I silently curse the poor souls that ask him what he's going to do after high school.

He's about to start his junior year - in a high school where well over 90% go off to college when they graduate, Not only will he not technically graduate, he will not be "going" anywhere. Not to community college. Not to a four-year college.

And not to Disneyland.

Carrie is a parent and advocate of a child with special needs and even more special gifts. She blogs at http://carrielink.blogspot.com/ where this is pretty much her favorite topic. Carrie’s book, WIL OF GOD: Embracing the Relentless Love of a Special Child, is available in print on Amazon and all e-readers.

Posted by Carrie Wilson Link at 4:00 AM