But we did.  We made it through.  It was Cary's first Halloween so naturally it was my job to make sure I had the obligatory costume.  Since she has super tense limbs I settled on a flower.  I wasn't even sure she was going to let me dress her up as dressing can be painful for her but for some reason she loved the flower outfit.

My poor son was another story.  I am a last minute person by nature.  I don't mean to be I just am.  So the Sunday before Halloween I turned to my husband and asked what Marvin should be.  He told me that I'd better get him a costume pronto.  So we drove down to the store and Marvin had to touch all the costumes and see what one was softest.  He found it.  It came with a mask, but the mask was too big.  This was his first year going door to door. Normally we do it at church but we were all down with bronchitis this year.  Here they are: 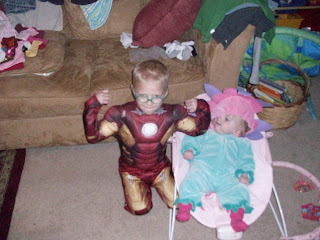 Despite sensory issues they did well getting ready.  Then we went.  It was dusky out and the first two houses went off without a hitch.  Then we got to house three.  I noticed an "unusual" figure on the porch dressed from scream.  It took me a minute to realize that that was a real person.  At first I thought he was being nice and holding really still since I had small children with me.  I was wrong.  After Marvin took a candy from the bucket on the porch Mr. Scream rose up and started towards Marvin.  This is scary enough for anyone, but add a child with triggers and you up the ante.  Marvin lost all color, screamed, and forgot to breathe.  While I am working on reviving my child the baby who is terrified of all things Sesame Street is calmly laughing, cooing, and trying to chew on the big scary man.  Go figure.  My husband and I got Marvin functioning again and the scream guy decided that maybe this wasn't such a hot idea.  I was really ready to deck him but figured that yelling at him loud enough for the neighbors to hear would suffice.

We made it out.  My husband and I decided to drive home at that point as I had had enough Halloween to last a life time.  As we were walking to the car Marvin and I took joy in telling ALL the people about the scary man on the porch and hopefully ruining his Halloween as well.  We were almost to the car when we saw a yard full of fun inflatables and tables laden with toys,  Marvin just stopped and stood out there.  A man  and woman approached him.  They asked if he liked toys.  Marvin had a death grip on my hand and nodded.  The man told him to come over and he could choose some.  Marvin timidly stepped in and saw his prize.  A foam sword.  Normally I hate weapons.  But after tonight and him just looking at me with those big blue eyes.  I caved.  The woman said he should have some more.  They loaded him up with a Frisbee, action figures, ball, and a giant basket loaded with candy.  Then they looked at Cary.  The woman smiled at her and gave her a light up dinosaur.  I don't know how they knew what she needed, but they did.  Both of my children ended Halloween on a high note.  Not all of our holidays end that way.  But this one did.

As we roll into a new season and a new holiday I think of this very nice family and hope that they found an envelope with a special surprise in there from a mom who is so thankful that there are still amazing people out there in this world who can take a simple day and make it magical for her very special children.