The week we had been waiting for so long has come and gone.  And it was probably the most amazing week of my life!  We were granted an amazing opportunity to go to Disney World and stay at Give Kids the World Village.  Thanks to an organization that you have heard me mention quite a bit Baking Memories For Kids.  If you haven't been following me you can learn more about them here.  They are sending families with children with life threatening conditions to Disney one cookie at a time:).  Check them out and support them!

While we were there Give Kids the World Village made sure that we were well cared for.  I'm the first to say that I'm not the easiest person to feed since being on the fodmap diet.  But they managed to cater to Marvin and my food restrictions and that was just the tip of the iceberg.  This village rocks!!  To learn more about the village and the families they support click here.

I could spend most of this post going in 2,000 different directions.  But I don't think you want to read war and peace ala blog style.  So I really thought about what I wanted to say. I managed to compress this into a top ten list of things I learned, re-learned, and truths that hit home during this trip. It's still a bit of a read, so sit back, grab your favorite beverage and let's start!

10.  Sometimes it's best to sit back and enjoy where the journey takes you just as much as the destination.

This one is hard for me at times.  We were originally scheduled to fly but due to my daughter not being able to sit by herself the airline told us they couldn't transport us.  After being grumpy for about 10 minutes we decided to drive it.  It was the best possible decision.  First of all on the way down I got to meet one of my all time favorite writers, Amy Clipston 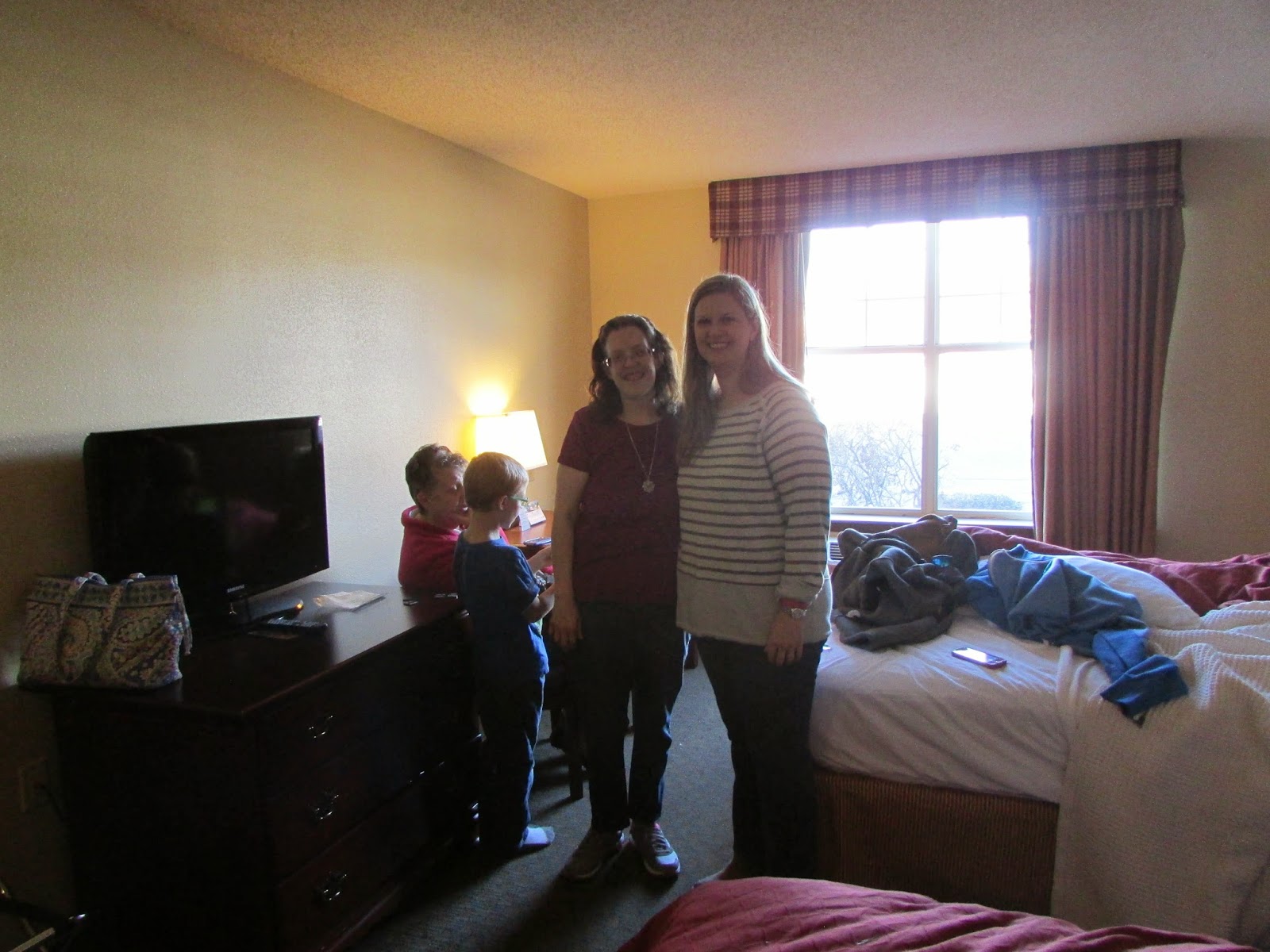 It was an honor to meet her and spend time with her!  Plus I got books!!  Yay!!!  On the way home we stopped at South of the Border.  It is between the North and South Carolina border. 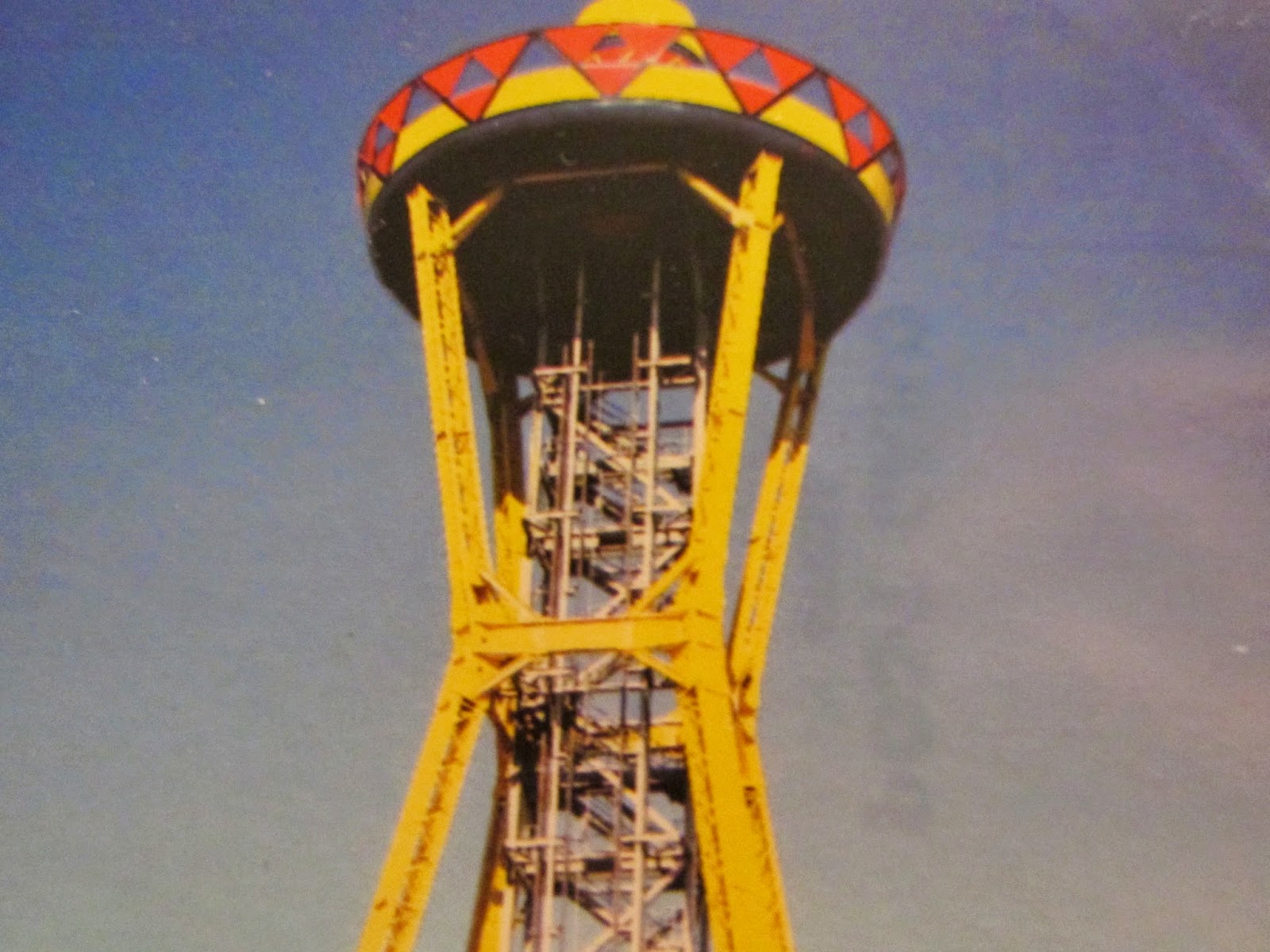 It had tons of buildings with stuff to do including hats around the world. 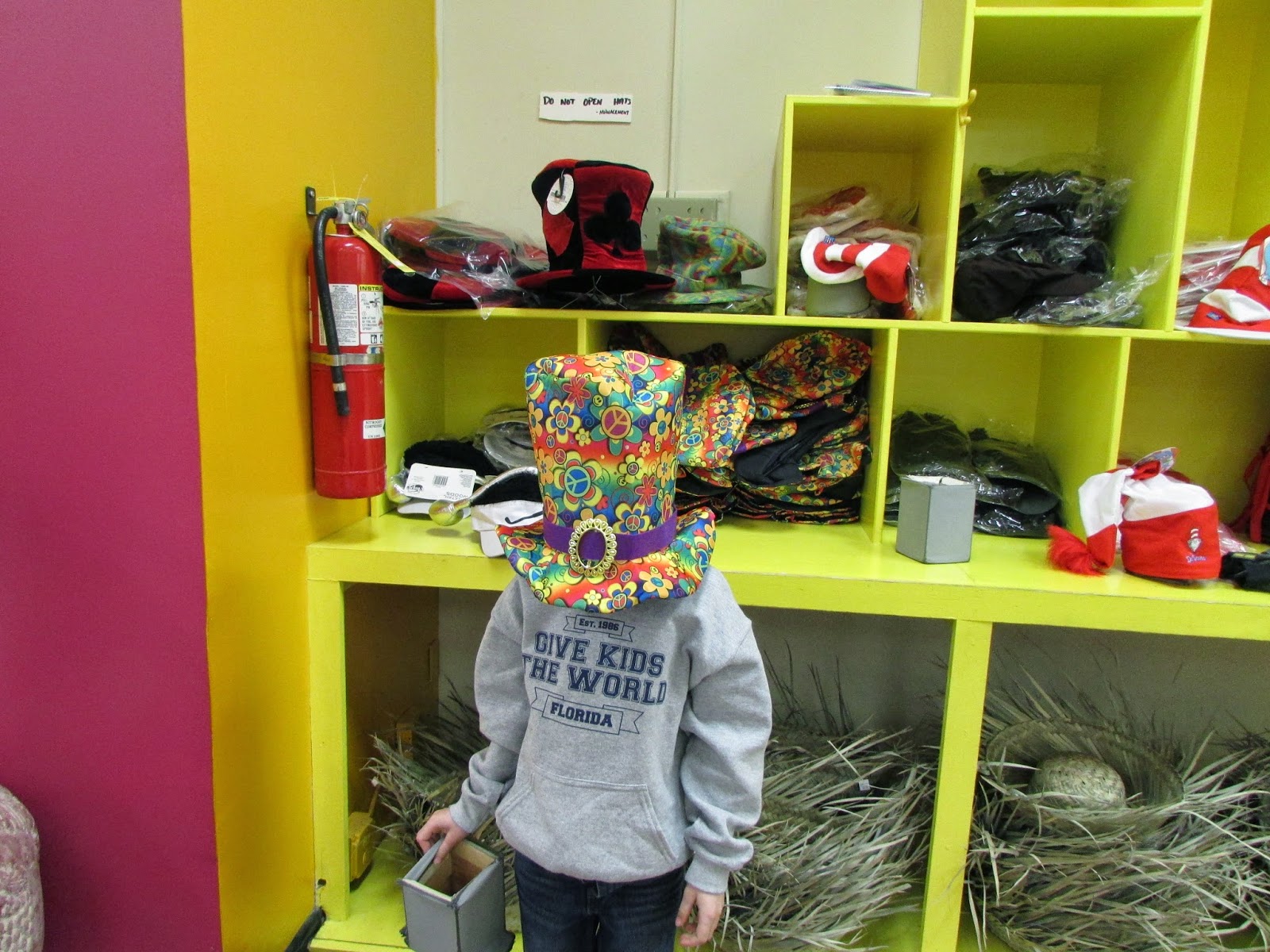 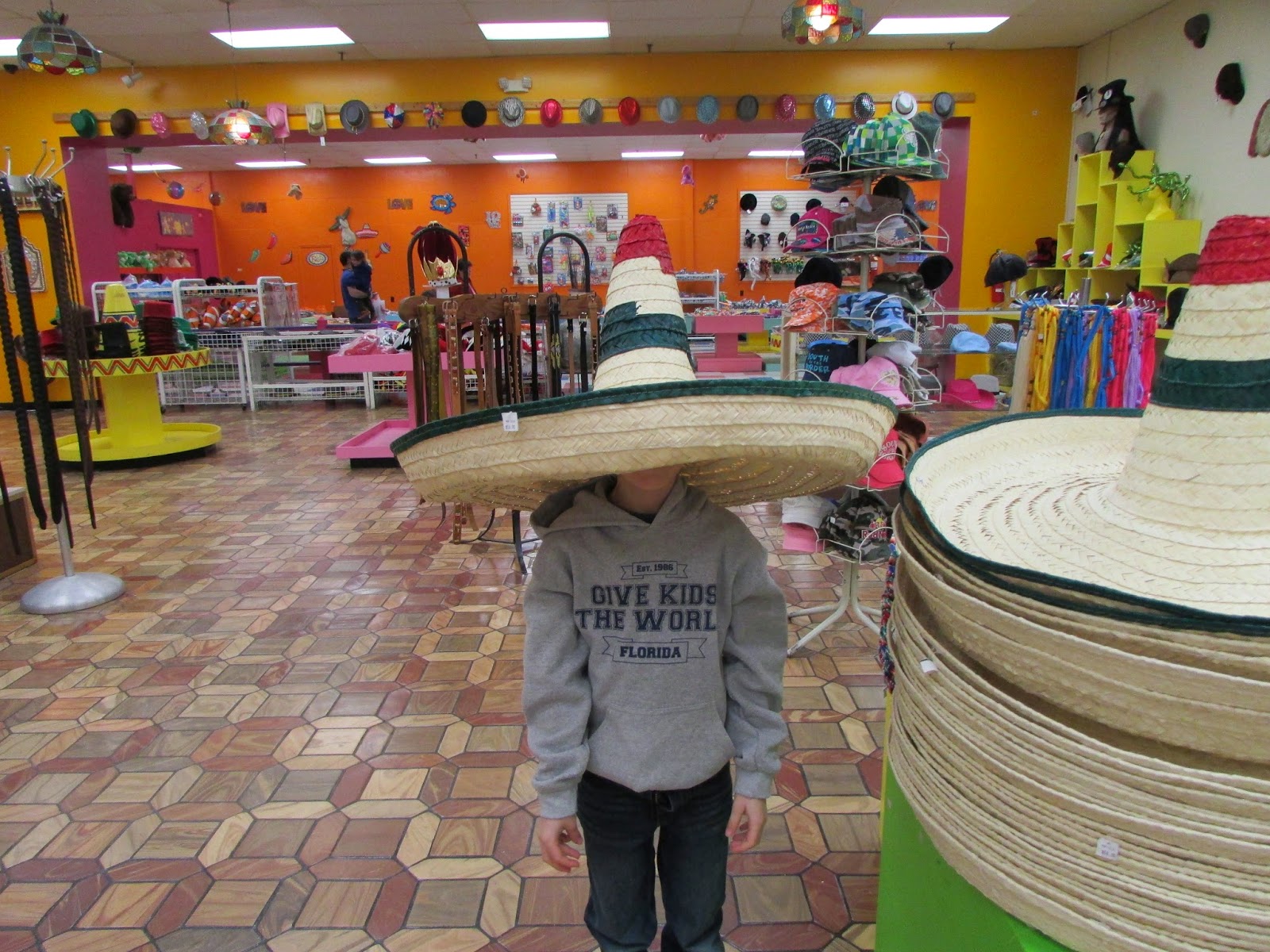 Yes, my son is under there.  We also spent time at the largest indoor reptile exhibit (according to them) in the US. 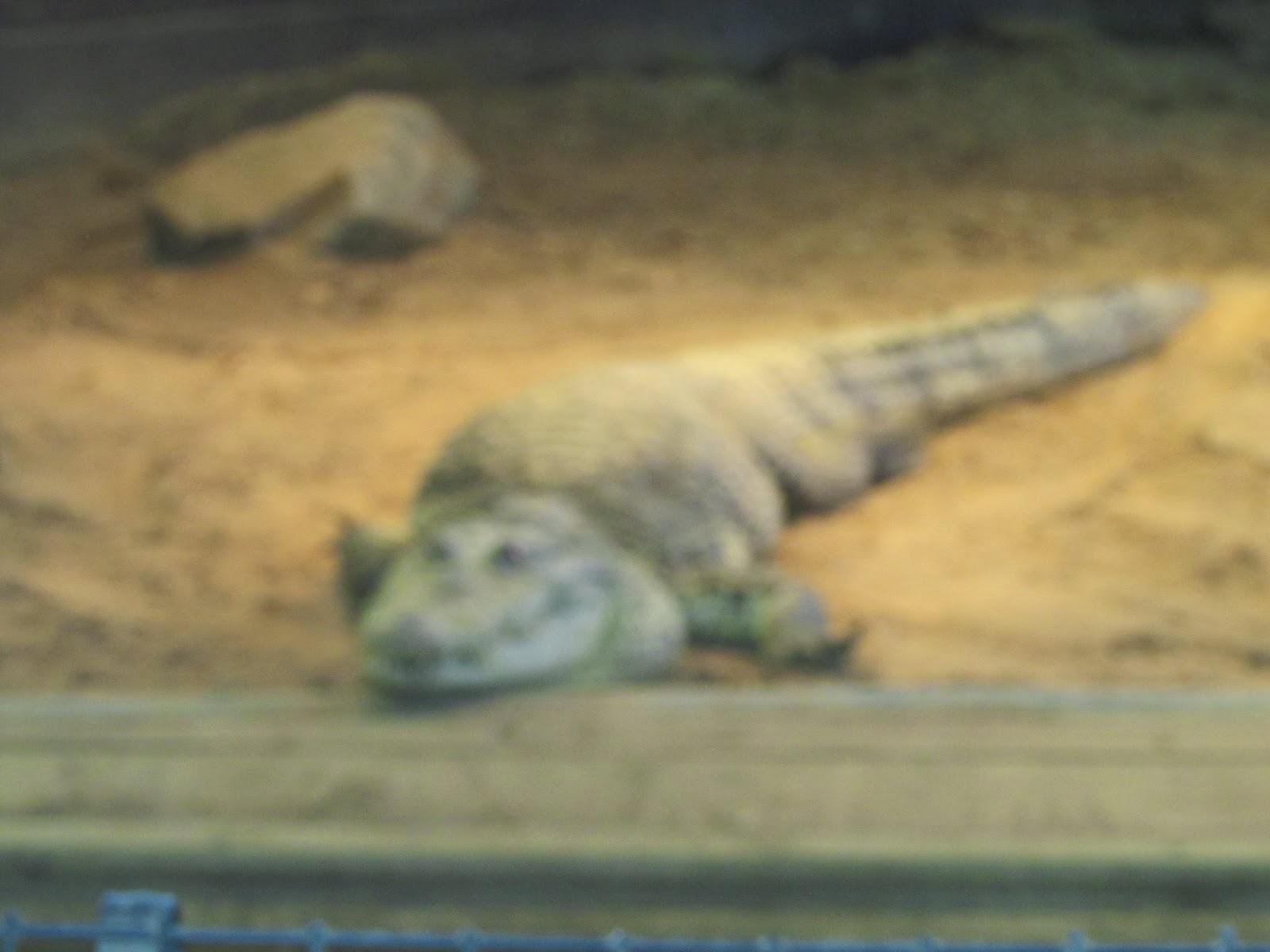 Sorry, it was humid in there but there were some really up close reptiles.  These are things we would have missed flying.

9.  While people can be wasting time on trivial life events they can miss important things.

You want to know what was the main topic on my news feed this past week?  Yoga pants.  Yup. People going on and on about wearing them, their husbands forbidding them, and the big debate on them.  It was ridiculous.  But when we let these things consume our time and energy we miss important things.  Case in point as I was standing in line waiting to ride on cars  with my son there was a giant group of children.  I had the honor of meeting a little girl who was battling cancer.  Her name was Molly and she has leukemia.  This is her third time fighting that horrible disease.  But she was all smiles as she got ready to board that car.  The man at the gate offered her encouragement telling her she would kick cancer's butt.  All the children there were amazing and I was blown away. There are so many things out there that really are news and we just miss them because we are so focused on trivial.

8.  Even though there are some really rotten people out there the world is still full of caring wonderful people.

It wasn't all roses on the trip.  When we were at Animal Kingdom my daughter decided to have a blowout.  My husband went to change her and while he was in the family bathroom this woman decided she didn't want to wait her turn.  She banged on the door, yelled and then called in a Disney employee to kick my husband out.  It wasn't fun.  But the Disney guy was awesome and told her to wait.  We also had an employee at Lego Land ignore us while we waited for a ride in the handicapped spot.  For 15 minutes.

But those were the only two times we had trouble.   The rest of the week was amazing!  The people bent over backwards for our family.  My daughter only had to smile and people showered her with stuff.  Disney employees bent over backwards for us.  We had a special pass that was like a golden ticket.  The characters spent extra time with my children and played with them.  I would have to say I got puddly on many occasions.  The woman in the checkout hugged me and told me I was a good mama.  So despite what we see in the world there are still so many good people left.  It gives me hope.

For one week in a village in Florida my kid was treated like every other kid.  No stares, no weird questions about what was wrong with my child.  She was simply Cary Lynn, the child addicted to the carousel ride.  It was day three before it dawned on me that no one asked for diagnosis, doctors, or any of that.  And it was GREAT!  We were just a regular family for that snapshot moment in time.  It made me realize that we have a long way to go back at home.  It will take a lot of work to educate others but it's a job I'm up for.  My child is not defined by her disability.

6.  It's important to let others help you and just BREATHE.

I'm a person who wants to do everything.  But doing everything by yourself is exhausting.  I don't like help either, but it really is needed.  For one week I didn't carry my tray of food or do much cooking.  The house ran like a well oiled machine and people constantly asked what they could do to help us.  I relaxed and when I let others help, I felt better.  I was able to just love on my babies and let others worry about dishes.  Life gets crazy, but taking advantage of help recharges you.  I feel great after my week and ready to take on what life throws at me!

I know this.  I'm surrounded by 200+ women who amaze and inspire me daily.  One of them was on the trip with me.  Our families went together and this woman just amazes everyone who meets her. Amanda Jones has a little one names Allie.  She is also an amazing little girl.  You can follow her journey on Facebook here.

Amanda has had her fair share of challenges thrown her way and is able to rise above them all. While we were on vacation her husband had to be rushed to the hospital (he's doing better now).  He insisted that she not waste a minute of this trip and give his babies their vacation.  I probably would have freaked out and melted.  But Amanda rocked it out.  She took all three of her kids and gave them magical moments that they won't forget. 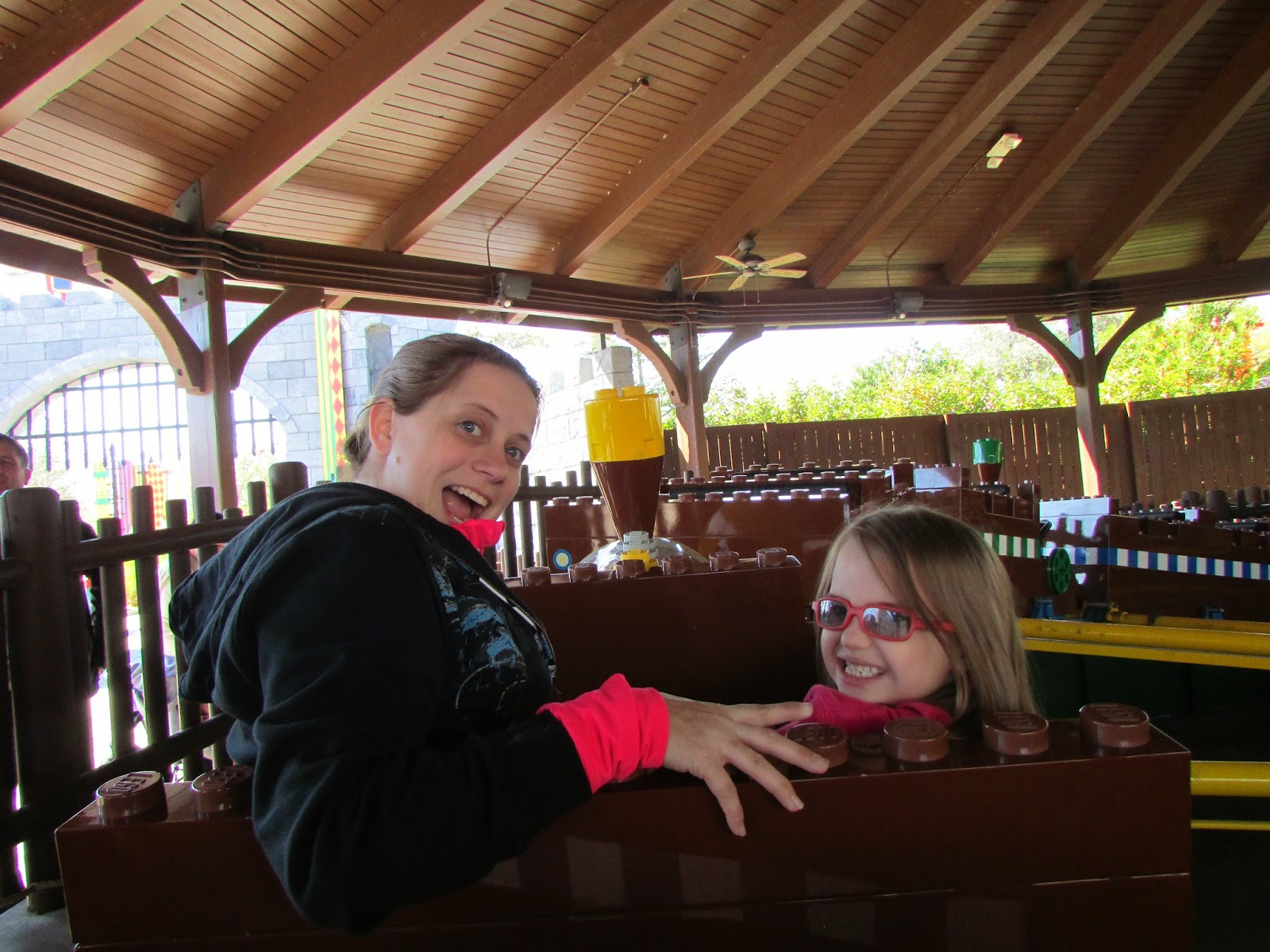 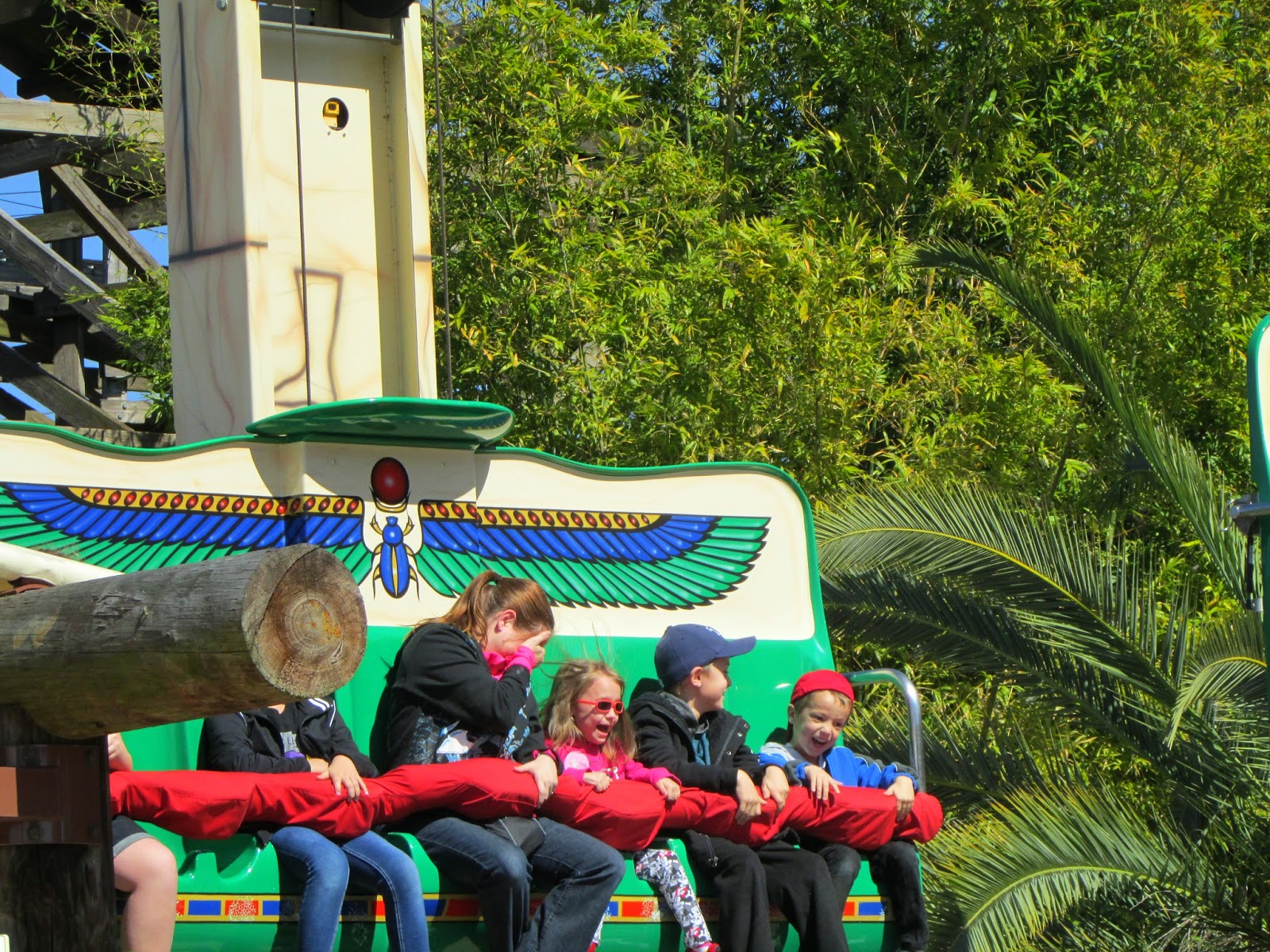 Amanda and Allie are two amazing people and I am blessed to have them both in my life.

4.  When people come together with a common cause real magic happens.

A lot of people made this trip happen.  It went so smoothly it was almost like magic.  But the real magic is in the big hearts these people have.  They didn't sit and say "wouldn't it be nice to do something".  They proactively came together and MADE things happen.  From the cookies that were lovingly made with my child in mind to the gifts that magically appeared every day at the village.  I don't think there are enough words to express our families depth of gratitude for every nice thing that was done for us.  Thank you seems so very inadequate.  But everyone of you blessed us this past week in a very special way.  I cried a lot (happy tears so all good!).  The caring touched our hearts and made us feel very cherished.

3.  I can handle what life throws at me.

I will be the first to admit that I can be a bit of an *ahem* spazz.  But sometimes I get it right.  When we were heading down on the start of our vacation we stopped so I could give Cary Lynn her meds and juice through her g-tube.  I opened up her shirt and realized with a sickening thud that the g-tube was gone.  Just gone.  Also there wasn't much of a hole left.  It was closing.  So we had to act fast.  I promptly had a fit.  Then I got the spare tube out and both Shannon and I went to cram it in.  Not happening.  So after freaking out a bit more we drove to the grocery store so Shannon could run in and grab some lubricant. As I looked at the hole I realized that I needed to buck up and get it done. So I manually stretched the stoma (g-tube hole opening) and managed to cram that puppy in.

Cary Lynn was all smiles and trying to roll through this whole ordeal.  Marvin was a wreck and I thought I was going to puke.  But after I realized what I had done I felt really proud of myself.  I've come along way and I realize that I've gotten much stronger.  I'm pretty proud and whooped it up a bit in the parking lot.

From coming out of Animal Kingdom covered in poop, running in to get lubricant for the g-tube, and not caring one iota about yoga pants he is simply the best.  Watching the way he interacted with the kids this week and the way he loves his family makes him a keeper in my book. 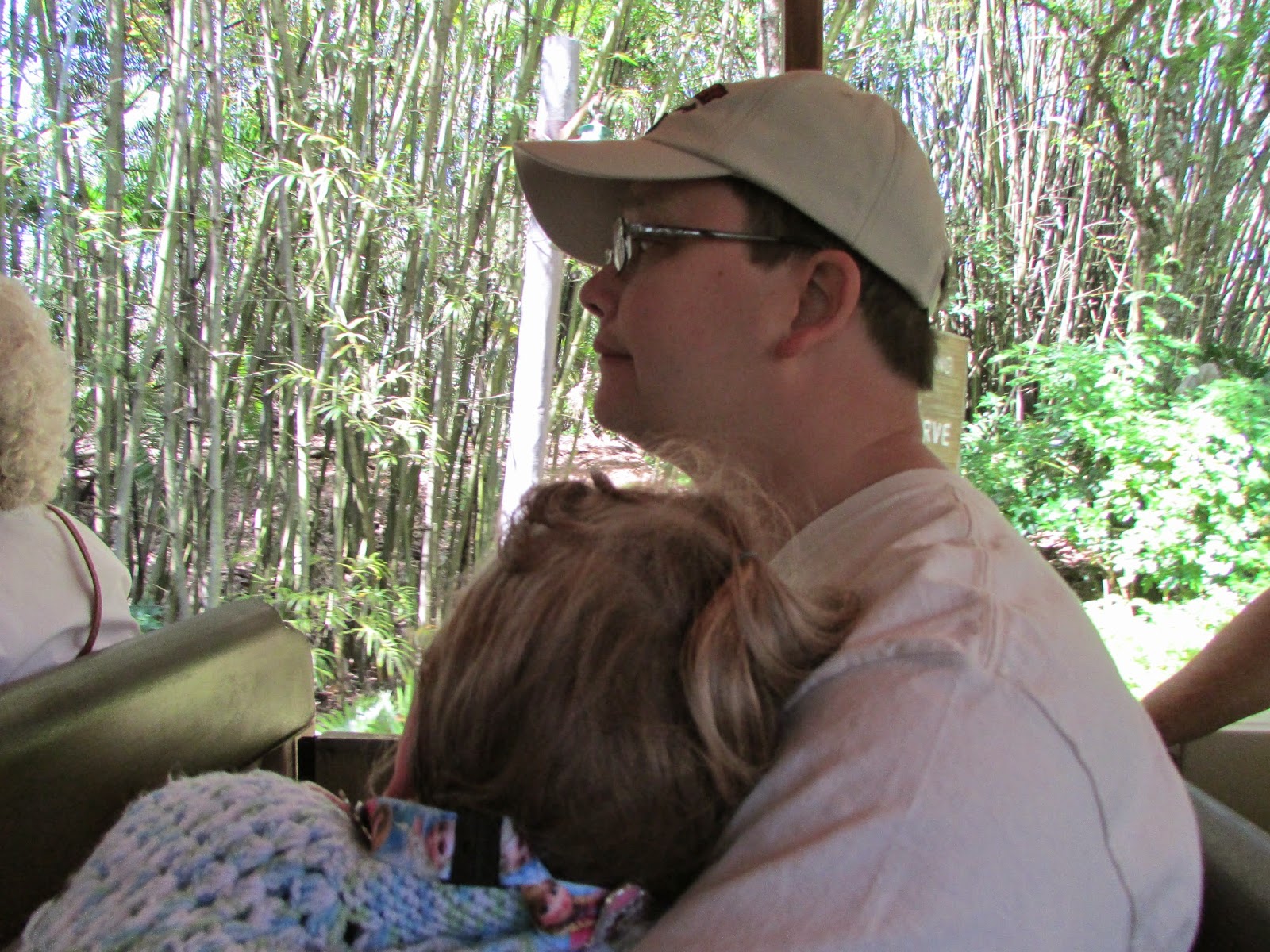 My kids are my world.  I know they are amazing and I want them to have special moments and memories.  Marvin spent time advocating for himself this week when things were too noisy or when he had enough.  He also spent lots of extra time loving on Cary Lynn.  He is turning into a thoughtful caring young man every day and I'm proud to be his mama. 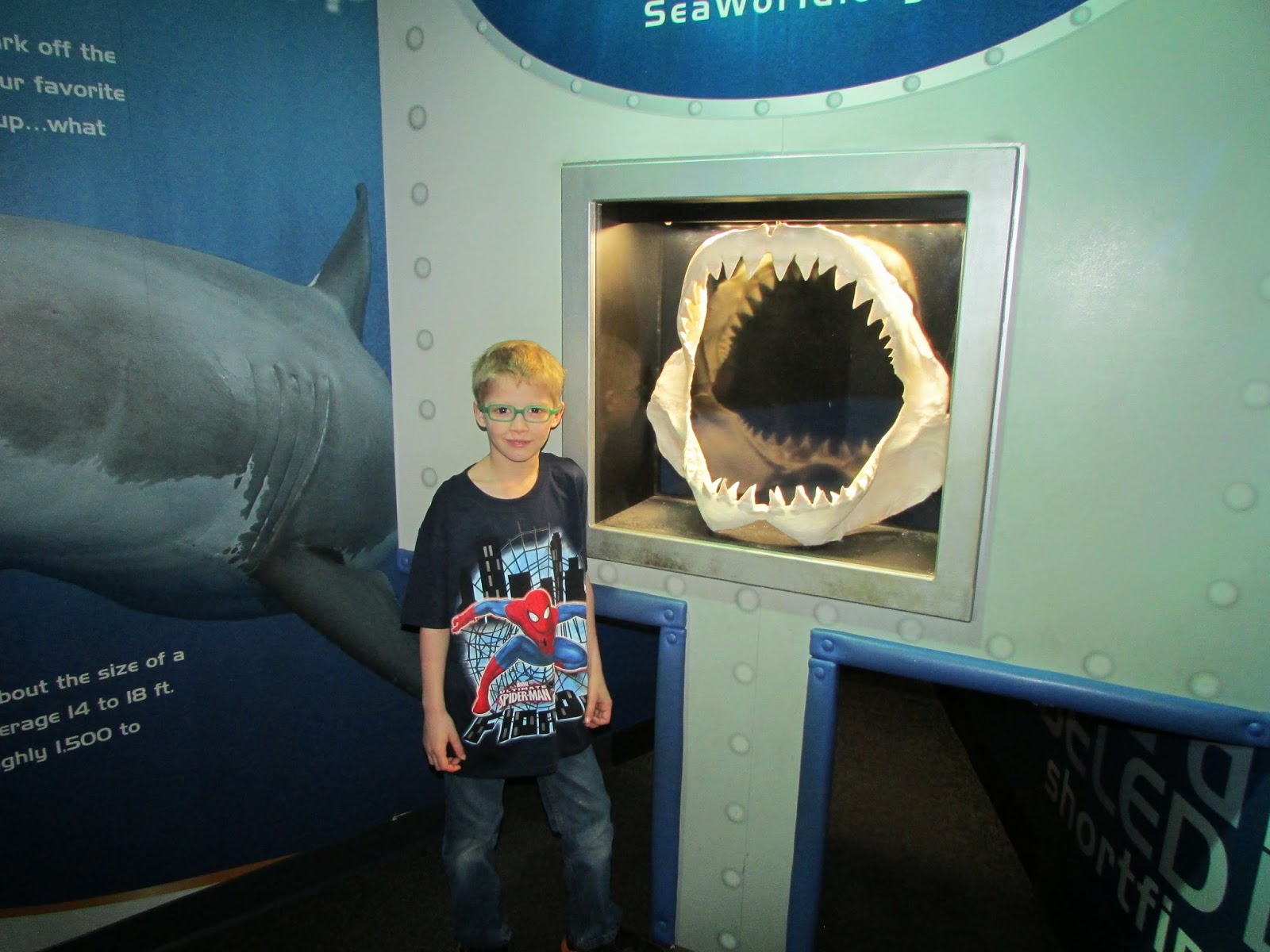 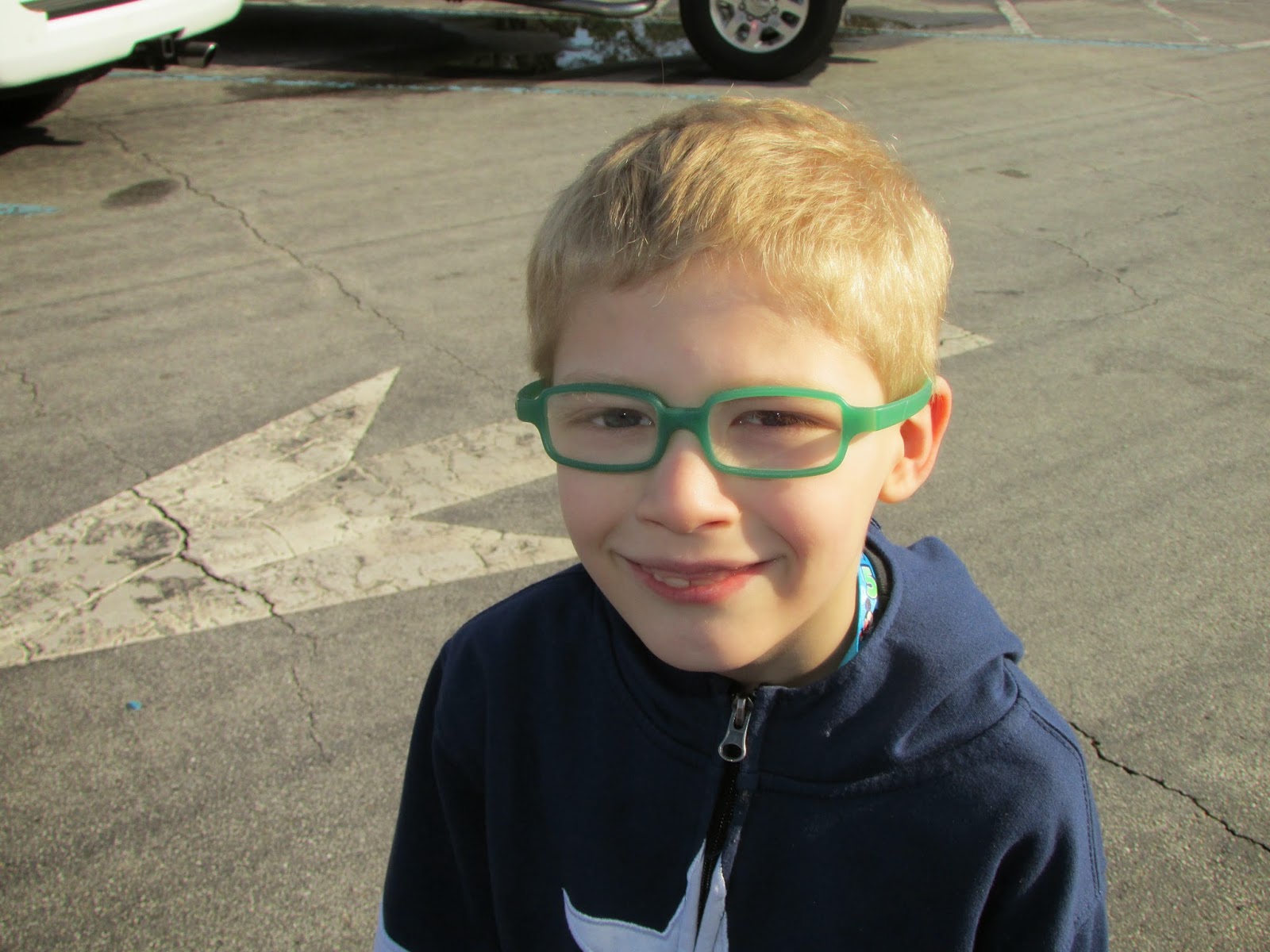 Cary Lynn is my princess, diva, and fighter.  She never lets life knock her down and has a smile for just about everyone.  She inspires me to try harder and fight for her daily. 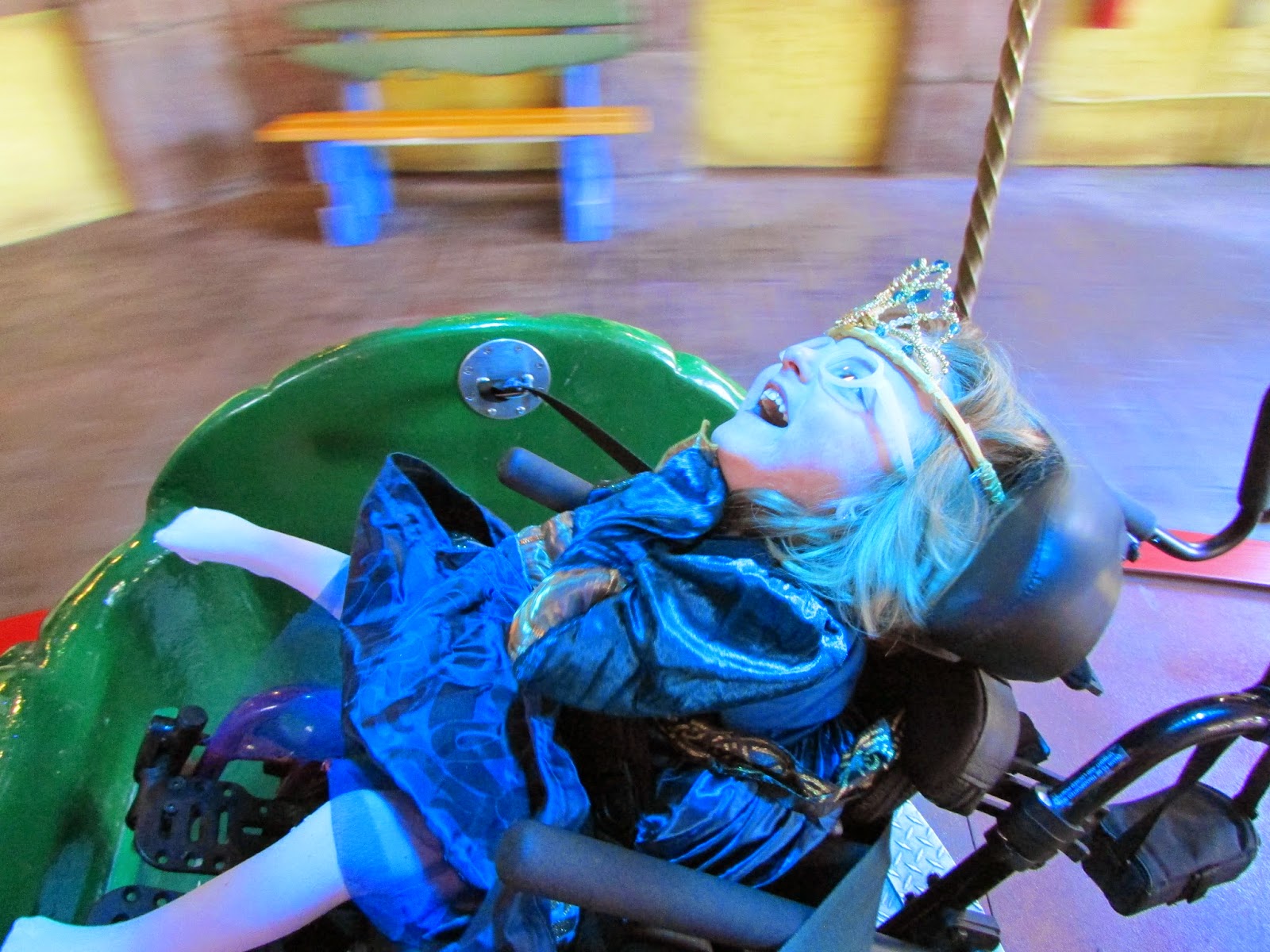 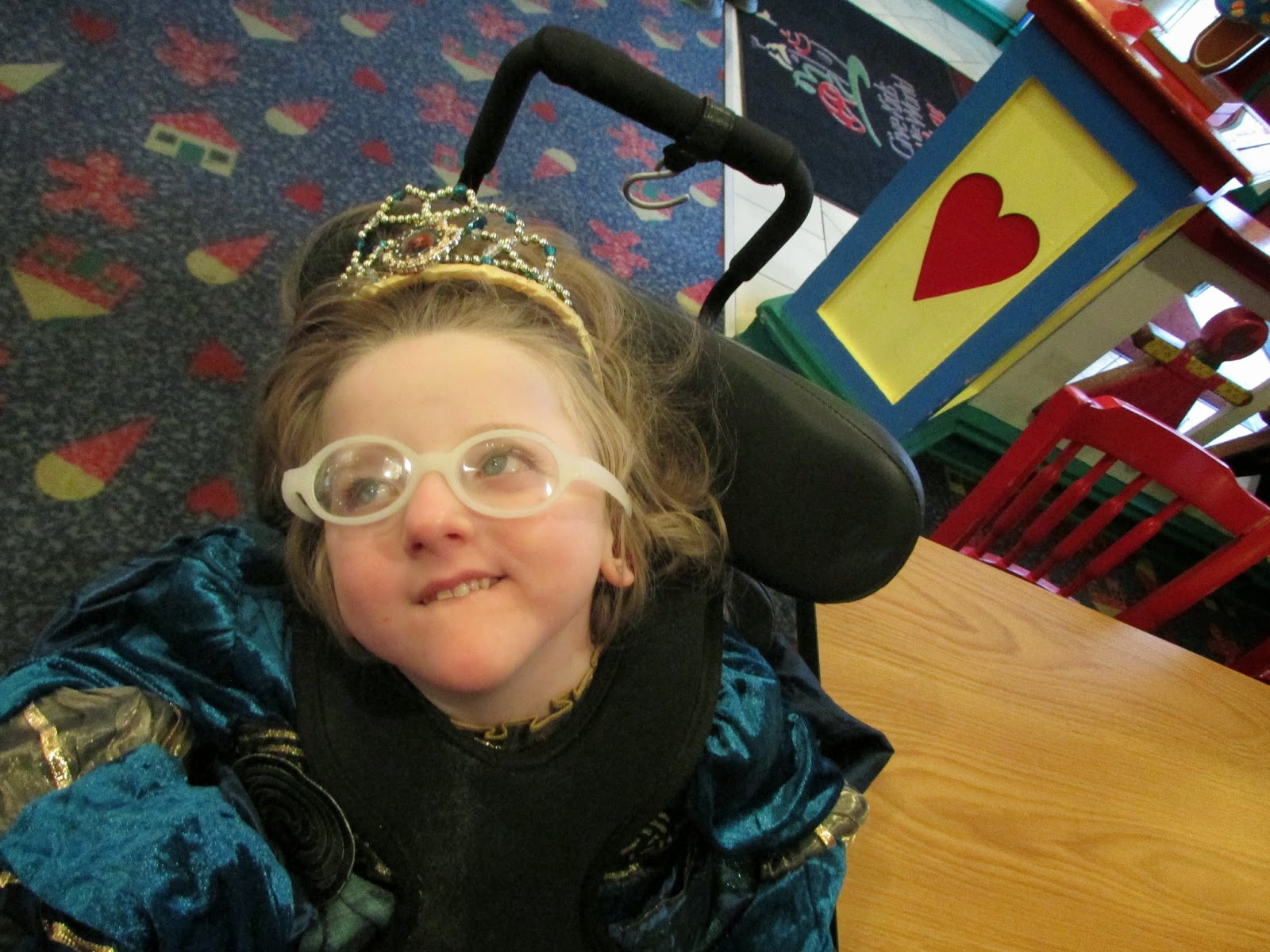 Once again to everyone who made this trip happen, thank you.  You have no idea how much this meant to our family.  Or how much of a difference you made.  Or how one little girl is now firmly convinced that she is royalty;).  Getting back to regular might take a bit to get used to:).  But for the smile on her face and for all the magic moments that we were blessed with will be memories that we will treasure forever.