We come to one of my favorite times of year.  The snow (yes I love it), the lights, the carols, the tree, decorations, cookies, secret surprises that I have to hide from a very sharp little boy.  It is also almost "gotcha" day for Marvin Fields.  He came to us December 12. Here is a look back at my little butter bean:). 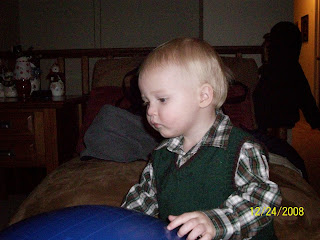 Awww.  When we got Marvin I thought I had won the lottery.  We went to meet him at his foster family's house.  He was pudgy, wobbly, and had the brightest smile.  I was in love from the get go.

His foster family had first choice to adopt him, but they had already adopted two children and wanted him to go to a family that could not have children.  It was supposed to be a slow and gradual process, but a day later we were told that Marvin needed to be placed with us in the next couple of weeks.

So we scrambled to get everything ready.  How we pulled it off I have no clue, but we did.  I had Christmas up and rolling and had visions of mother son bonding under the tree with stories and cookies.

Marvin left for preschool that morning unaware that his world was about to shatter.  His social worker picked him up at noon with all of his belongings in her car.  He cried himself to sleep and when he woke up he was with his new family.  I was beside myself with joy.  Marvin, not so much.

When he woke up and realized that his things were in a new room big tears rolled down his fat cheeks.  His foster father was deaf so all he did was walk around the house signing for his daddy.  He wouldn't come near us.  He cried like his heart was being broken.  And it was.  All that joyful bonding went down the toilet.  Marvin was scared, homesick, and heart sick.  My child had already survived massive amounts of abuse and we basically took away the only family he ever knew and expected him to be joyful about it.

Marvin began the healing process.  My son is a survivor.  But while I love the holidays, Marvin remains shaky about them.  For the outside world he puts on a happy face and tries to participate with all that he can muster.  That after all, is the socially acceptable thing to do.

But there are times when the pain and fear resurface.  Marvin has a harder time going to school.  He was taken away from the only family he knew, whose to stop someone else from taking him?  Sometimes, I can't even leave the room without him melting down.  So I hold my child tight and assure him the best I can.  I take him with me.  He holds my hand with an iron grasp afraid to let go.  Someday he will believe he is safe.  Until that time I just hold him tight.

He looks at our tree and cries.  He doesn't understand why he is so sad.  He tells me,"Mommy, my heart hurts."  He has nightmares, meltdowns, and he gets angry.  As I sit and rock him my heart breaks over and over again.

So how do you teach a little one to find joy?  To feel the magic of the holidays?  Nice and slow.  I coax him to cook with me.  I read him stories of our faith.  I teach him our family traditions.  But most of all I let him know that it is OK to feel sad and angry and scared.  That he is surrounded by love and people who will protect him.  That someday he may want to do more, but for now it's OK just to watch, to take in, to process it all.

Slowly, Marvin has been a bit better every year.  This year he asked to put up the tree, a first. We take it slow and explain things.  Marvin is not good with change, but he is less resistant to it every year.  I may never get the Christmases I dreamed of.  Marvin has a lot he still needs to process and work through.  It may take a lifetime.  But I am learning that it is OK to let go of the fantasy and build Christmas our own way.  To take is slow and rejoice in what I have and not mourn for what can't happen.

The best gift I can give my son can't be bought and put under a tree or in a stocking.  It is the gift of letting him be himself and loving him just the way he is.  That is what makes the holidays, and our lives magical.

Amy Fields is a wife, mother, and advocate.  You can read about her family in her blog Many Kinds of Familes

Posted by Many Kinds of Families at 12:11 PM