I need a drink!


My boy picks his nails. It is not the greatest habit in the world, however, it's what he does and I go with it.

This year he discovered that he could pick his lip! Now this is a very different story. You see, once he has worried away a little bit of skin then that area becomes even more bothersome to him. He will continue to pick his lip in order to remove further skin and hence starts the cycle leading to disaster. I realise that this doesn't sound very pretty. But wait, it gets worse. He then starts to use his teeth.

I don't intend to give you all the gory details and show you scary pictures! It is extremely painful and seriously upsetting. For him and me.

My son is autistic/has autism. He doesn't understand that the more he picks and chews, the worse the situation becomes. This has happened four times this year.... oh, and throw in some mouth ulcers as well. The only reason he ends up in such a mess is all because of a little bit of loose skin on his lip. We try to remain vigilant and ensure that his lips remain in tip top condition, however, in the blink of an eye this can change.

This past weekend has involved keeping him under our watchful eye for as much as possible. On the rare occasion that he has been left, we find that he has attacked his lip again and we have a bloody mess to try and sort out.

There is light that comes out of the darkness.

My boy has remained stoic throughout the whole experience. The pain that he has suffered is unimaginable, however, he has never cried, fussed or became anxious. I rushed him off to our Doctor only to find a stranger on duty. Not only did my boy cope with a new face but he also allowed him to place a tongue depressor into his mouth ~ a brand new experience!

I have had to pump my child full of medication (which I hate doing) and he has just taken it on the chin and opened that mouth for me, regardless of the fact that the taste is foul. I have also been cleaning his teeth and gums with a warm salty solution.. and I am still shaking my head over the ease at which he allows me to do this. His resilience has been amazing.

On Saturday night I made the decision that he should sleep in my bed *with me*. A new bed and sharing with another person ~ talk about a huge curve-ball. Our first night was a bit topsy turvy, although it makes me smile to remember being woken up by my arm being squeezed (even though it was 3am!). Our second night was much better and I learned what I had always suspected, he sleeps with a pillow on his head all night!

As I write this, my boy's lip is slowly healing and my relief is immeasurable.

It has been a tough time but one that has been handled with quiet dignity.... and I am not talking about me! 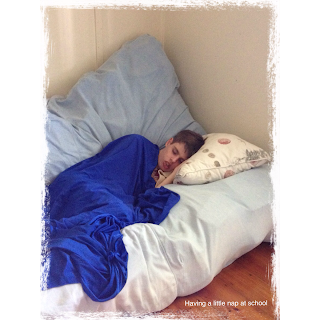