An Evening With Temple

Do you know how the universe just seems to present you with exactly what you needed to see when you needed to see it?  So it was yesterday evening, when I spend about an hour just a mere 30 feet away from Dr. Temple Grandin, listening to the grand lady speak of life, of herself, and what has made a difference.

We have had a rough several weeks with Jack.  Ever since right before the end of the school year, his anxiety has become almost more than any of us can handle.  We've been attempting to find that magic bullet of a medication that can bring him some relief, but to no avail thus far.  We're moving on to the next round of medication trials now with the knowledge that each medication we check off the list means the next has more questions, more side effects, and more of the unknown associated with it.  Yet, we press on.  We must.

It is in these moments that hope can seem to slip away.  The moments when changing your 4-year old's diaper is met with a torrent of legs and arms flailing and screaming and when potty training seems so far in the distance because the same anxiety that inhibits the diapering also does the same for toileting.  It's in those moments when you just cannot figure out what will make your child happy, because nothing seems to at the moment.  It's a powerless feeling - this dissolution of hope.  I try to remind myself that there is always a light at the end of the tunnel and that we've been here before and come out on the other side.

Easier said than believed in moments such as these.

When I saw an email circulate recently about Temple Grandin coming to speak here in Atlanta, I felt drawn to attend.  Yet, it would have been easier not to go.  The hubs has had to work a lot of overtime lately and I have simply been so exhausted from dealing with Jack's quickly shifting anxiety that I wasn't sure I'd have it in me.  On the other hand, I knew that I might not get this opportunity again anytime soon, so I needed to go.  I had to go.

After some questionable parking arrangements and almost being made to stand outside while a friend had reserved me a seat inside, I was finally there listening to Temple Grandin speak no more than 30 feet from where I was sitting.  My friends, what she had to say was so real and simple and just made me feel like this lady is the one to whom we should be listening. While I have always claimed that many of the "stereotypes" of autistic individuals are just that - stereotypes - I can say that the stereotype of the unpretentious, honest autistic does fit Temple.  She is real in a take-it-or-leave-it kind of way.  She doesn't seem to affiliate with one group or another.  She doesn't take sides.  She is just Temple...totally and unabashedly herself.

She's open with the fact that she needs medication to control her anxiety...just like Jack.  As a parent, especially when you hear people debate the decision to medicate their children, it is so refreshing to hear an autistic adult say that they not only need medication, but feel that their lives are better for accepting it.

And yet...she is constantly striving towards perfection.  When asked if we should make autistics conform to the world or the world conform to autistics, she said this, "Both sides should meet in the middle."  She acknowledges that some of the work is hers to do, particularly if she wishes to be accepted in academia and within her career field, as livestock handling is a particularly machismo-male dominated industry.  She doesn't expect the world to bend to her whims, but she longs for a balance in which accommodations are made to help autistics function within this world in which we live.  In her words, "Accommodations should enable."

She also spoke of helping to cultivate the interests of our autistic loved ones in a way that gives them a marketable skill.  She spoke often of the autistic that sits at home playing video games and collecting an SSI check, and how she felt that was a waste of such talent.  In her words, "The world needs all kinds of thinkers."  She spoke of a desire to see hands-on learning return to schools - in the form of sewing, mechanics, and shop classes - and for individualized learning to become the norm.  When asked at what age she learned to read, she informed the audience that it was in the 3rd grade.  She said that the old Dick and Jane books of our youths were of no use to her - that she couldn't learn given that style of teaching; however, her mother hired a tutor to work with her on reading and within a semester, by using books that centered around Temple's interests, she was reading at a 6th grade level.  She also encouraged parents to help their autistic children find a mentor in their area of interest who could guide them and help cultivate in them a greater understanding of just how they might contribute to that given field.

Yet, what Temple Grandin brought to that room before even opening her mouth was one word - hope.  Just her presence was a symbol of what could be.  She spoke of autistics as lifelong learners, so parents should not be discouraged when their child does not meet a particular milestone until much later.  Something she encouraged - and something I needed to hear in my particular moment of feeling so low - was that parents need to continue to push and guide our children to help them find a practical use for their talents.  That strengths should be encouraged and that parents should work towards helping our children function within a world that seems so counter to their very way of being.  As a mom who has struggled with that very question - Am I doing too much?  Am I pushing too hard? - I needed to hear that it was okay.  In fact, Temple seems to have a great deal of respect for her mother's tenacity in never giving up.

It made me hope that in spite of Jack's resistance at times, he will one day look back and appreciate how I've tried to help him find his way.

Support.  Encouragement.  Guidance.  Individualized learning.  Those were her messages.

One of her loudest messages went unspoken, but it needed no words.  Her presence articulated it all.  Look at me.  I am okay.  With the right support and encouragement, your child can be here, too.  It's within your grasp.  Their "okay" might not look the same as mine, but it will be okay nonetheless. 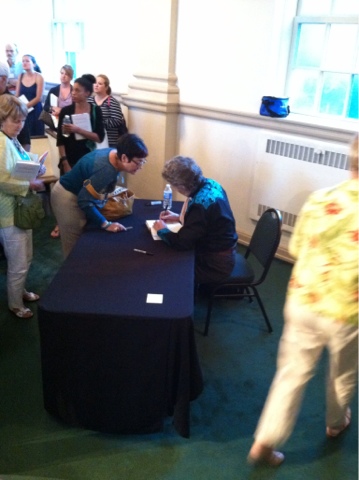 Honestly, I came home to a Jack who had put his father through one hell of a night.  He was up until 11:30 PM, and I was crashing.  However, I thought back to Temple, about the predictions her mother received and just how far she had come.  She didn't speak until about when Jack did.  She didn't read until the 3rd grade.  Surely there were times in which life seemed rough in the Grandin house, but look at where Temple is now.  She is giving hope to so many and has made a successful life and career for herself.

I have to remember that these are just bumps in the road.  That there is light on the other side.

Thanks, Temple.  I needed that encouragement.
---

Jeanie is a former engineer turned stay-at-home wife and mom to an amazing 4-year old little boy on the autism spectrum.  After her only child was diagnosed at 24 months with autism and an alphabet soup of special needs, she began to write about life parenting a very young child with special needs with honesty, optimism, and as always, a touch of humor.

When not posting here, you can find Jeanie at her regular blog, Reinventing Mommy.  She has also been featured on The SPD Blogger Network and The Oxygen Mask Project, to name a few.  To follow more of her ramblings and get the latest on her posts, like her on Facebook or follow her on Twitter!

Posted by Reinventing Mommy at 10:20 AM